FIRST is a USA-based non-for-profit organization established in 1989 by inventor, entrepreneur and STEM advocate, Dean Kamen. His goal is to inspire youth and instill in them motivation and curiosity and encourage them to pursue all that FIRST stands for: Inspiration and Recognition of Science and Technology. Technion President Prof. Peretz Lavie is the Chairman of First Global.

Together with Yeruham’s Yteam who received FIRST’s prestigious Chairman’s Award in recognition of their exemplary leadership in STEM, and Yafia who won the Rookie All Stars Prize, the five groups will travel to Detroit to participate in the FIRST International Robotics Competition for high school students, to take place on April 24-27. In addition, six outstanding participants received scholarships from the Technion.

FIRST Israel was founded 15 years ago by Lieutenant General Avihu Ben Nun, former commander in chief of the Israeli Air Force. Ben Nun, who serves as the Chairman of FIRST Israel recounted how he had met with Dean Kamen back in 2005 and was presented with an opportunity to establish a FIRST branch in Israel. “After a brief discussion with my close friend Benny Kedar, we decided to take on the challenge.” Understanding the heavy load that establishing such an initiative entailed, they sought out Technion as their strategic partner. Technion President Prof. Peretz Lavie welcomed the initiative and gave the program full patronage. “Since that early time, the program has grown rapidly and today our goal is to have 20,000 students by the year 2020,” said Kedar.

The FIRST project has made considerable headway in many regional councils across Israel. “It’s really very similar to a youth movement, many students are drawn to FIRST because of its exciting and innovative nature,” said HaKfar Hayarok youth representative Shira Linik. “FIRST has promoted STEM studies at our school and there are currently over 250 students who study science and technology. We have named our robotics program, The Bunker (secret hideout). It has become our second home, and we often stay there until late, getting ready for upcoming competitions, continued Shira.

For privacy reasons YouTube needs your permission to be loaded. For more details, please see our Datenschutzerklärung.
I Accept

Mentor of Kfar-Yona’s team, Rami Mireli said, “FIRST attracts many students. The competition lasts 3 days, the project itself needs to be prepared in 6 weeks but in fact the students work on their projects all year round. It is a huge endeavor and the students’ tremendous dedication makes it all possible.”

‘Coopertition’ has become FIRST’s motto. “The combination of cooperation and competition is what FIRST is about,” said Prof. Emeritus Menahem Kaftory of the Schulich Faculty of Chemistry at Technion. We see in these students a prime asset to the State of Israel, and we emphasize that winning is not the ultimate goal. We teach in a way that fosters cooperation, creative thinking and joint collaboration.”

Prof. Emeritus Kaftory brought the FIRST project to Technion at the same time as Avihu Ben-Nun. With the help of Eyal Hershko, who was recruited for this purpose and with the generous contribution of Josh Weston, the two groups joined forces and established the organization.

“At FIRST competitions, sometimes the students compete and sometimes they are on the same team,” explained Prof. Alon Wolf of Technion’s Faculty of Mechanical Engineering. “All skill levels are welcomed and needed, technical or non-technical.”

Points are allocated not only for technical competency but also for a range of other criteria. Social outreach is a key component and each team has a member whose responsibility is to initiate projects within the community.

Ben Nun emphasized FIRST’s core attributes: the first, a five-year work plan carried out by leading experts at MIT. The second, FIRST Israel’s group of 1,500 volunteers who devote their time and efforts to this cause and third, letting the students take the lead. The mentors present the questions but the students are required to provide the answers and not vice versa. “This is how they attain the task of creating a robotic device which can carry out complex tasks within a limited six-week time span. It is an empowering and meaningful experience,” said Ben Nun. 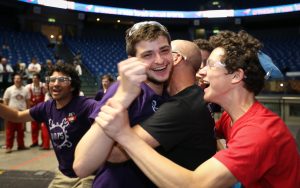 FIRST holds four annual competitions arranged according to age groups; FIRST Lego League Jr. for kindergarten until 4th grade, FIRST LEGO League, FIRST Tech Challenge, and FIRST Robotics Competition. As of 2013, the competition has officially become a Technion-named project. Over 200 municipalities from all over Israel are actively involved in FIRST’s programs which promote creativity and provide children of all ages with a set of key skills for their future careers.

The positive impact of FIRST Robotics Competition on its participants is gratifying. Many former FIRST program graduates remain actively involved in the program and take time off from their work willingly to support, mentor and assist the students in any way they can. “We are a FIRST FAMILY,” said proud parents Dan and Tami Bilberg, who arrive every year to support their daughter in the Robotics Competition and to take an active part as mentors and judges. “We were drawn into the program without realizing that there is no exit. Once you join FIRST, you’re in for life,” said Tami.